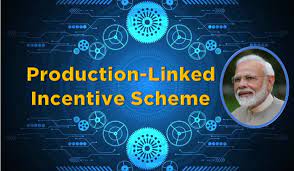 The Production Linked Incentive, or PLI, plan intends to provide enterprises with incentives based on increased sales of items created in domestic units. The initiative encourages international firms to establish units in India, but it also attempts to encourage Indian companies to establish or expand existing manufacturing facilities, so creating more jobs and reducing the country’s dependency on imports from other nations.

It was first established in April 2020 for the Large-Scale Electronics Manufacturing sector, but was subsequently expanded to include ten additional industries by the end of the year. This program was created in support of India’s Atmanirbhar Bharat movement.

Scientific, technological, and knowledge-based concepts may be turned into a strong engine of economic development when appropriately backed by venture capitalists.

Why is it in the news?

The Production Linked Incentive (PLI) plan for the textile industry was recently authorized by the Union cabinet.

Textiles are included in a larger announcement of PLI Schemes for 13 industries announced previously in the Union Budget 2021-22, with a total spending of Rs. 1.97 lakh crore.

PLI for Textiles, in conjunction with RoSCTL, RoDTEP, and other government initiatives in the industry, such as supplying low-cost raw materials, skill development, and so on, will usher in a new era in textile production.

Textiles and garments are a labor-intensive industry in India, employing 45 million people and ranking second only to agriculture in terms of employment.

It is one of India’s oldest businesses, serving as a reservoir and transmitter of traditional skills, knowledge, and culture.

It is broken into two sections:

A Brief History of the PLI Scheme

• The major goal of this plan was to encourage international investors to set up manufacturing facilities in India, as well as to encourage local manufacturers to expand their operations and create jobs.

• As far as eligibility is concerned, the plan is open to any electronic manufacturing enterprises that are either Indian or have a registered unit in India.

• In the Union Budget 2021, Finance Minister Nirmala Sitharaman announced the addition of thirteen new sectors to the PLI Plan for a five-year term, with Rs. 1.97 lakh crores set up for the scheme beginning in the Financial Year 2022.

• The administration wants to integrate India into the global supply chain and boost exports.

• By 2025, India is predicted to have a USD 1 trillion digital economy, as demand for electronics is expected to rise as a result of programs such as Smart City and Digital India.

• The PLI plan will improve the competitiveness of the Indian automobile industry and its globalization.

• India’s textile industry is one of the world’s biggest, and this program is expected to attract significant investment in the sector, boosting local production, particularly in the manmade fiber (MMF) segment and technical textiles.

• As the world’s second-largest producer of steel, India’s inclusion in the PLI system would benefit the nation by potentially expanding export options.

Startups may contact venture capitalists for further funding after getting initial funding.

• Similarly, telecommunications, solar panels, medicines, white goods, and all of the other areas described may help India expand economically and become a worldwide manufacturing centre.

Increased Investment and Job Creation: It will result in new investment of over Rs.19,000 crore, a cumulative revenue of over Rs. 3 lakh crore, and more than 7.4 lakh new job possibilities in this area, with several lakhs more in supporting activities.

Because women dominate the textiles sector, the initiative will empower women and enhance their involvement in the formal economy.

Priority given to underserved areas: Furthermore, emphasis will be given to investment in Aspirational Districts, Tier 3 and Tier 4 towns, and rural regions, and industry will be encouraged to relocate to these areas as a result of this priority.

The PLI initiatives benefit 13 different industries. The following are the details:

The PLI program for automobiles and auto components, with a budgeted expenditure of INR 259.38 billion (US$3.50 billion), has been authorized by India’s federal government to expand local manufacturing capacity, including the development of electric and hydrogen fuel cell cars. The Ministry of Heavy Industries and Public Enterprises is in charge of the scheme’s implementation.

Venture capitalists have invested $97.7 billion in mobility tech businesses by the end of Q4 2021.

According to a senior government source, venture capitalists are showing greater interest in backing Indian drone entrepreneurs after the government recently liberalized laws for the industry and announced a Rs 120-crore production linked incentive (PLI) plan to stimulate manufacturing.

The government has set out INR 181 billion (US$2.43 billion) for the plan, which aims to build local manufacturing capacity of 50 gigawatt hours (GWh) of ACC and five gigawatt hours (GWh) of Niche ACC. The Department of Heavy Industries and NITI Aayog are the primary implementers of the plan. This program is also in line with India’s goal of increasing EV usage over the next decade while decreasing reliance on imports. The strategy is primarily aimed at major corporations.

Hardware for computers and electronics

The Ministry of Electronics and Information Technology is in charge of putting this plan into action. Mobile phones, certain electrical components, laptops, tablets, all-in-one PCs, servers, and other items are included.

The Ministry of Food Processing is the major implementing body for this project, which was approved with a budget of INR 109 billion (US$1.47 billion). The advantages of the PLI plan in this sector are projected to flow down to farmers, allowing them to tap into the industry’s tremendous employment potential.

The components of the PLISFPI scheme are as follows:

Medical devices have been recognized as a priority industry for the flagship ‘Make in India’ initiative, and the Indian government is dedicated to developing the manufacturing environment. The PLI phase one of this plan has been completed and phase two has been declared. The following medical device segments are eligible under this program:

Steel with a unique composition

The Ministry of Steel will be the major implementing body for this project, which has been approved with a budget of INR 63.22 billion (US$849.85 million). This scheme will run for five years, beginning in FY 2022-23, with the incentive being released in FY 2023-24. In the case of certain product categories, the first year may be postponed by up to two years. The incentive will be available from FY 2023-24 through FY 2027-28. Coated/plated steel goods, high strength/wear resistant steel, speciality rails, alloy steel products and steel wires, and electrical steel are the five categories of specialty steel chosen under the PLI plan. The government has started the application window after releasing guidelines in November 2021.

The following PLI initiatives serve the Indian pharmaceuticals sector by boosting local manufacturing capacity, including high-value items throughout the global supply chain. The Department of Pharmaceuticals is in charge of putting these plans into action.

In 2021, venture capital investment in the biopharmaceutical industry will have topped $20 billion.

The government would spend INR 62.38 billion (US$831.27 million) on total incentives under the PLI plan for white products (air conditioners and LED lights). From March 10 through April25,2022, the second round of applications will be accepted.

The Department of Telecommunications will be the major implementing body for this program, which has been approved with a budget of INR 121.95 billion (US$1.64 billion). Recognizing the need for further assistance for MSME units, it provides them with additional incentives during the first years. Core transmission equipment, 4g/5g, next generation radio access network and wireless equipment, access & customer premises equipment (CPE), internet of things (IoT) access devices and other wireless equipment, enterprise equipment: switches, and other products as determined by an empowered group of secretaries are included on the list of target products.

The Ministry of Textiles will be the major implementing body for this project, which has been approved with a budget of INR 106.83 billion (US$1.44 billion). This plan aims to shift textile production away from natural fibers and toward MMF and technical textiles, in line with global consumption patterns. MMF garments and MMF fabrics, as well as 10 technical textile categories and products, will be included in this sector.